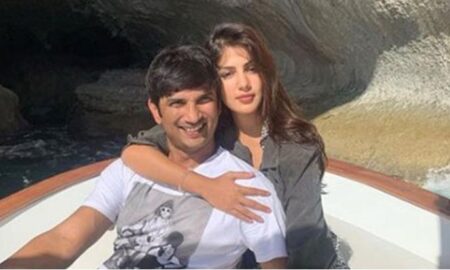 Mumbai : Actress Rhea Chakraborty is ready for arrest, her lawyer Satish Maneshinde said in a statement issued on Sunday.

“Rhea Chakraborty is ready for arrest as this is a Witch Hunt and if loving someone is a crime she will face the consequences of her love,” Satish Maneshinde said in his statement.

Being innocent, she has not approached any court for Anticipatory Bail in all the cases foisted by Bihar Police now with CBI, ED and NCB,” he added.

Meanwhile, Rhea left her residence for the NCB office on Sunday morning. She was summoned by the Narcotics Control Bureau (NCB) to join the investigation of actor Sushant Singh Rajput death case.

Over the last two days, the NCB has arrested her younger brother Showik Chakraborty, Rajput’s house manager Samuel Miranda and Dipesh Sawant, a member of the actor’s personal staff

Sushant was found dead in his apartment in Mumbai on June 14. His father KK Singh had filed a case with the Bihar Police against Rhea, her father Indrajit, mother Sandhya, brother Showik, Shruti Modi, house manager Samuel Miranda, friend Siddharth Pithani and unknown others. The case is currently being handled by the CBI, with Enforcement Directorate (ED) and NCB also joining the probe.